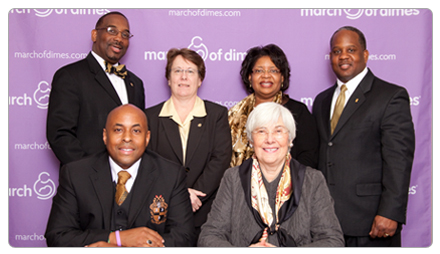 For more than 20 years, the men of Alpha Phi Alpha have been working with the staff and volunteers of the March of Dimes Birth Defects Foundation, taking Project Alpha to hundreds of communities and thousands of teen males. Alpha Phi Alpha and the initiation of Project Alpha began in the late 70s in Chicago by the Brothers of Iota Delta Lambda.

The relationship with the March of Dimes came later in 1982, which led to the program becoming a national program. Alpha Phi Alpha Fraternity, Inc. chapters all across the country worked with their local March of Dimes to implement Project Alpha programs. Project Alpha week is the first week of November. This program reaches more than 25,000 young men every year.

Locally, the GZL Educational Foundation has funded Project Alpha events here in the Tampa Bay area and has attracted thousands of students through the years. With your help, we can make the 2013 Project Alpha effort a tremendous success.

What does it mean to be a partner?

March of Dimes national service partners are clubs, organizations, fraternities, sororities and labor groups who have chosen the March of Dimes as a community partner to implement mission programs, participate in fundraising campaigns and recruit additional volunteers to help.